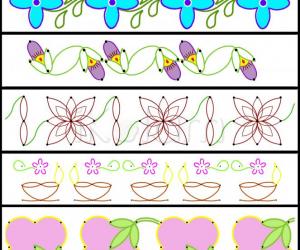 Ok friends, for a change I am uploading 5 borders which I have combined for you and hope you like it...

Swans are supposed to be epitomes of whiteness and purity. In Indian mythology, a
swan is capable of separating water from the milk! There are not only white
swans, but also black ones too. Since they are rare, any rare event is called a
black swan day! Today is a black swan day! You'll find in this rangOli borders
with the black swan as the motif. Enjoy!

The paisley design looks like a tear drop or a comma. It is used quite extensively
in embroidering textiles. People juxtapose various sizes of paisley patterns
sometimes. In every household this design is present in a curtain, sari or a
hand kerchief. Here are the last three paisley designs.

Of all the border designs, the most popular one is the so-called paisley design.
This is nothing but a stylised version of the mango design. This design by way of
India, Persia reached the European countries like France, Holland and England in
the seventeenth century. These patterns were printed. The name paisley
owes its origin to the Scottish town Paisley. Returning soldiers and officials
brought these patterns from India. These were printed extensively on the local
textiles. Here are four border creations out of the possible seven.

Now that Gowri is back I thought I should upload some more border designs for her everyday chalk kolams.

You have already seen how to create the seven type of borders. In south India, the
mango borders are very well liked. Here are all possible borders using a real mango
"cheek" as the basic motif. Saree designers, please get ready!

The next three possibiliites for the borders are given in this picture:
(5) a horizontal mirror reflection,

A vertical mirror and a glide (reflection in
the horizontal plane followed by a translational movement along the border), and,
(7) vertical and horizontal mirrors (this automatically creates a a80 deg rotation).

These seven and only seven possibilities are called frieze groups. Depending upon
the response, I will give more explanations if necessary.

There are so many border rangOlis I see nowadays. This one and the next one in this
series explains the mathematical order in the borders. Borders are basically one
dimensional. Only two-fold rotations (180 degree rotations) are considered herein.
Vertical and horizontal mirrors are also considered. Also translations, that is,
movements along the border length after a reflection in the horizontal mirror are
also considered. Such movements after a reflection are called glides.
In this picture, four are considered -
(1) No symmetry, (2) a glide (reflection followed by translation, i.e., movement along
the border direction), (3) A two-fold rotation (180 deg rotation), (4) vertical mirror.

Here are some lovely border kolams which I am sure will highlight your already beautiful kolam on special occasions. Hope you like them...

Here are some lovely border kolams which I am sure will highlight your already beautiful kolam on special occasions. Hope you like them...