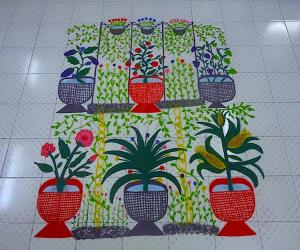 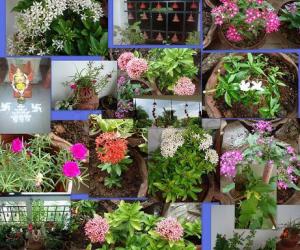 I was inspired by the plants by a friend here.
I too like to share my Balcony Garden. This is at 2nd floor balcony.

A little tendril - how many rangOlis!

The trees are bare with branches like skeletons, bare and brown.
But soon the spring breeze will wake them up. They will put forth
tendril after tendril. New blooms, green leaves, orioles' songs -
all very soon in a few weeks. In the mean time, with one little
green tendril, oh, how many rangOlis! Enjoy!

Someone once said; â€œGod loved the flowers and invented the soil. Man loved the flowers and so he invented vasesâ€- Vases, so he could bring the flowers inside and bask in its beauty and its fragrance. But today, I am going to talk about a flower which could neither be fitted in a vase, nor could anyone want in his or her living room. The flower is called Amorphophallus Titanium. The flowerâ€™s name â€œAmorphophallus Titaniumâ€ literally translates to â€œthe misshapen male organâ€.

Titan Arum is a member of the Family Araceae It belongs to the Arum family and is also called arum lily and is native to Sumatra, in Indonesia. T is native to the rain forests of central Sumatra in Indonesia. I met this arum lily at the Conservatory of Flowers, located in the Golden Gate Park in San Francisco. It was on loan from UC Davis botanical rare plant is housed. It blooms once in a few years. The last bloom display was at this conservatory a few years ago, last week of May 2005.

"Ted the Titan," a corpse flower, attracted more than 16,000 visitors while in bloom, In 1878 an Italian botanist, Odoardo Beccari, discovered it in Sumatra. In the UK, the plant was first brought to flower at the Royal Botanic Gardens, Kew, in 1889.
When it bloomed again in 1926 police had to be brought in to control the crowds. On August 2, 1999 Amorphophallus titanium achieved full bloom at the Huntington Botanic Garden in San Marino, California. This was only the 11th recorded bloom in the United States and the first ever in California. Equally astonishing was the number of people who came to visit this magnificent plant on the peak day of its blooming period, over 10,000 admirers.
The bloom is composed of a creamy colored spadix and a maroon colored spathe. The spadix with many tiny male and female flowers at its base can be up to 12 feet tall. The large frilly-edged leafy structure pale green, petal-like spathe enclosing the spadix is called the spathe. The spathe, which is a highly modified leaf, has been measured to be up to 3 feet across. The completely unfurled spathe resembles an upturned fluted bell with a maroon interior. Male and female flowers are separate, with the female flowers receptive first, the male flowers releasing pollen the next day; this ensures cross-pollination. A plant cannot produce seed unless pollen is provided from another plant. The spathe unfurls about 3 weeks after the bud tip first appears; at our plant's growth rate (4 inches per day), during the time the flower is dormant; an enormous leaf erupts from the soil and photosynthesizes to store energy for producing a new flower. The leaf can get up to 20 feet high and have a palmy leaf 15 feet wide!