This is a line kolam for tamil new year. The basic design for this kolam is from the Meenakshi temple "sudhai sirpam" with naaga design, seen on the roof after being painted newly for the kumbabishekam. 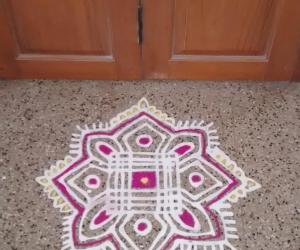 Very nice! This naga design is one of my favourites!

B. Deepa, as Jaya said we are made about such designs. I am also one searching for designs from the temples. Have you ever visited Papanasam Siva temple. the whole Prakaaram is full of such nice Maa kolams.

Line kolam on the earth, is a good contrast. Nice.

Excellent deepa mam, after trying out the kolam only i can find how with a very simple basic design it complicate to achieve such neat alignment without any mistakes..

Please post more kolams for us to enjoy and try.

This is quite nicely done. Drawn on mother earth gives it an added beauty.

(1) I have a question - do you have the picture of the prototype on the ceiling of
the Madurai temple? I would love to see it.

(3) This is a very ancient pattern, I believe at least more than one thousand years
old! Poems have been written fitting this design. They are called kuMDalinI
nAgabaMdha. You may find one such Tamil poem in my gallery.

(4) The theory behind these patterns is that they were once used in wars as
formation of soldiers. There is maximum exposed part wherein the assets
(to borrow modern terminology) are placed and so it is difficult for the enemy
to penetrate it. I think everyone knows the story of padmavyUha (or chakra vyUha)
which abhimanyu could penetrate and get in, but could not get out.

Very nice kolam.
Dear JKM rao sir,
The descrption you are giving to the trational kolam are very very nice. I like to read.
I wonder to learn those.
Keep posting sir.
viji

on the 8th of this month astabandhana kumbabhishek was performed in meenakshi temple,the pass holders were allowed to see it from the roof[west tower of the temple],me and my mom were allowed to pass by the yaaga kundam for different deities,around the "aadi veedhi" decorated with pandhals and paintings,when we were waiting in the queue i saw this naaga mandalam on the roof .the design had the face of nagam on the four extended outer parts[as in the kolam].as every one knows the temple has been newly painted and so i was attracted towards the pattern in which the twinning appears.the naagams were intertwined in this pattern,so i tried the same.

Very beautiful deepa.I also share some more informations about Meenakshi temple.On the roof at before Meenakshi amman sannadhi there is a painting of Meenakshi.When u stands in before that the eyes of meenakshi looks at u.The wonder is wherever u stands (four sides)the eyes looks at u.Also,the same pattern follows in Sivalingam and Nandhi painting called sulalum nandhi and sivalingam.