After a gap I could put this wet maavu kolam and colored it with color podi. How do you like this mustard/ Arakku color combination... looking different without the normal bright colors!? 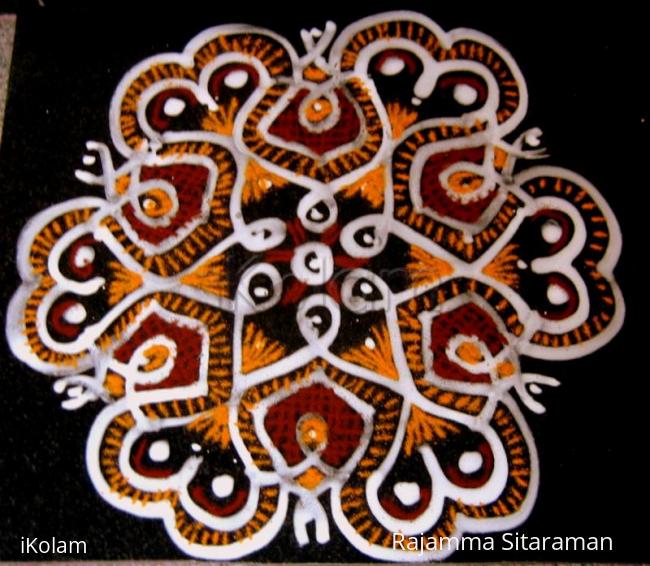 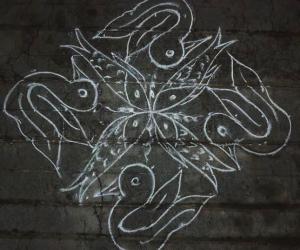 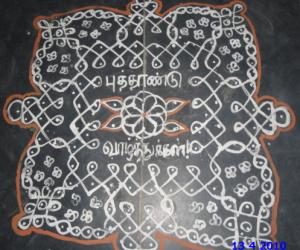 wow rajamma mam...this pattu saree col combination is so lovely and d overall kolam design is itself so pretty...

Rajam, excellent kolam and fillings, the hearts with eyes resembles a snake head too.

looks like ammans face, very devotional, kp it up

AS USUAL YOUR KOLAM IS VERY ATTRACTIVE AND BRIGHT.

oh!!! Rajammaji you never told me that snakes also comes to your beauty parlour for make up. after your make up all snakes looks very pretty..Hmmmm i think snakes are getting ready for their festival ( naga chaturthi and garuda panchami)

hi frendzzz this is Rajammaji's new parlour : name : "PAAMBU PARLOUR" before going to parlour pls take appointment previous day itself otherwise you will have to sit with snakes ONLY, I AM AFRAID OF SNAKES ...... Escapppppppppe ....................!!!

Snakes breathing fire!!. Very unique way of colouring you have. Making all of us copy cats and also inspiring us to be creative!

Hey, Lakshmi, "paambu" endru vaayaal sollave payappadum naan adhukku beauty parlour vekkaradhaa? no chance.While putting this design I never thought it will look like snake heads. Since all of you get that feeling I am also frightened now. May be this kolam is welcoming the Naagpanjami Pooja festivel.
rajamma

Super pattu podavai combination. It looks like snake only to mee. If u can upload the original kolam with dots i can copy this for nagachathurthi with white n red. Will u?

NICE RAJAMMA MADAM!!!!!,Doing an ordinary thing in an extraordinary way!!!!!!this is your style!!!!!.When I saw the thumb nails I thought it is a "photoshop" kolam.thank you for sharing.

Very bright and beautiful. The small image looks very pretty than the enlarged. All your creations will be beautiful mam.

rraajusree, I have sent the basic design with dot count in cafe colomn.( Lata, since you are flooded with so many entries waiting to be uploaded , I took the previlege of sending this in cafe colomn, hoping members will share their stories about this festivel... Naaga Chthurthi/Panchami.... Ok va?
rajamma

Simple, but very imaginative! Beautiful colouring. This introduces a bit of awe in me for obvious reasons and therefore it is "awesome"

Harmless snakes??? yuckkkkkkkk!! Last night we saw a tiny snake slide under our car that was parked on the road which later disappeared in the dark. Anita was so scared to take the car to college this morning, fearing it would be wound round one of the wheel of somehow find its way into the car from underneath (two weeks ago there a small lizard found its way inside the car and scared the daylights of my cousin who was sitting in front - we had the time of our life trying to chase it out - that's another story)..

Rajam this kolam though it has a traditional colour combination and may look pretty (had I seen it earlier than today), I would have loved it - but the impact of seeing that tiny fellow alive last night - I am pretty scared to look at your kolam and enjoy it more. Maybe I will look at it later and give you my comments - sorry about that but I am feeling a bit creepy still

Rajam my net connection is giving me some trouble for a long time (BSNL you see) and I was not able to log in properly for sometime. Couple of days I had some time and internet co-op with me but I could not finish commenting on all the kolams I missed earlier - hence did not comment on this kolam earlier. Had I done so I would have been able to tell you my views - but after last night I am not in the right frame of mind still - really sorry

Thank God I couldn't see any sssss only some alien's faces, Maybe my brain is trying to convince me... Well, Explanation ends here...
Wow !!! Mangalagaramana Kolam.. The centre flower chikku kolam attracts me a lot. Always you come up with a new concept RajamAmma..
Reminds me of the famous cotton saree combo which I loved to wear in my college days...