My Golu - Unity in Divinity-One BHAKTHI for various GODs

5 steps depicting various forms of Divine power.
1st step depicts the forms of Lord Krishna from birth when Vasudev carries the just born Krishna across the ocean (doll on the extreme left)
2nd step represents the various forms or roopams of Goddess Devi-Durga, Lakshmi, Saraswathi, Andal, Meenakshi, Annapoorani, Lord Mahalakshmi.
3rd step depicts the different avatars of Lord Vishnu commonly known as Dasavatharam
4th Step shows the various darshan roopams of Gods while the last step illustrates the different forms of Art such as sculpting, music, dance, pottery, etc. of which Bhakthi is represented as a form of art.
The add-ons (park) highlights are
1. Disneyland-Mickey”s toontown, Soundsational parade (Mickey, Minnie, Goofy, Pluto, Donald), Winnie the pooh adventure land, Alice in wonderland . This is an attempt to depict the real Disneyland at USA
2. The story of divine mango –fight between Lord Ganesha and Lord Muruga at the Kailash parbath and the significance of Pazhani-one of the padai veedu of Lord Muruga.
3. Vilakku pooja set depicts the ladies performing vilakku pooja at a temple

The various artwork created by me (mixed art work, Mural painting, pencil shading, Glass painting etc.)are on display on each of the step
The traditional vilakku has been decorated as the Goddess here with saree, ornaments, mugam and kunjalam
Rangoli and water lotus are on display before the Golu dolls.

The navadhanyam have been spread before the Chettiyar set. 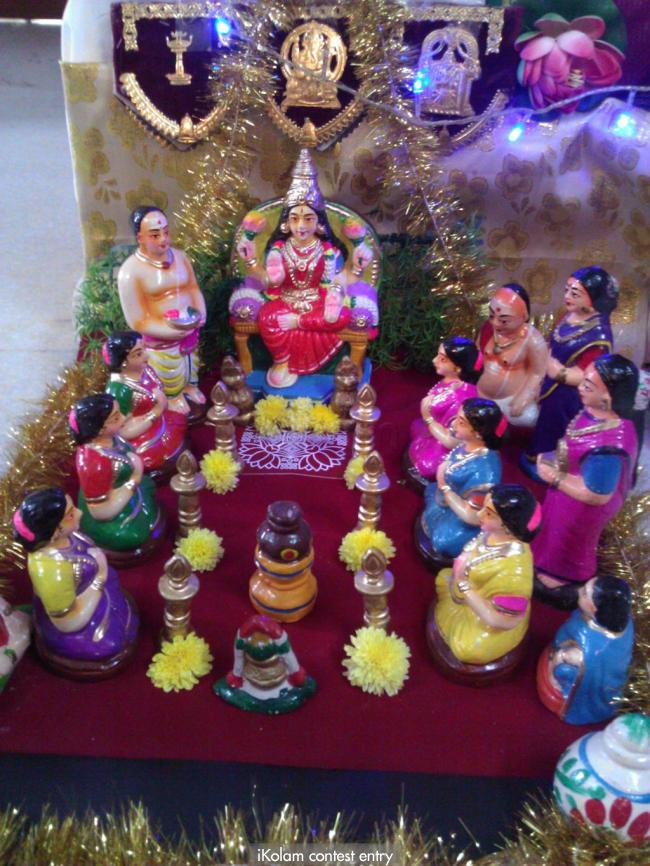 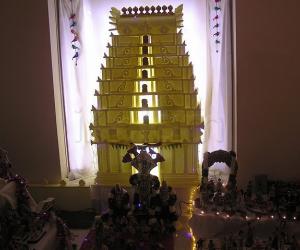 Very nice set up of the golu. Nicely explained which made my job easier. That vinayagar set looks so nice. That Radha krishna looks so pretty at the top. A very beautiful vilakku poojai set indeed. All the best for the contest.

beautiful kolu...looks nice ....All the best

Where are those add-ons? In your description you had mentioned about disney land set up and the mango story which was the root cause for Pazhani Muruga. But I could not see them here.
All the best and keep it up

Simply superb!!!! The alangaram for everything is very very good.

very pretty !! all the best!

Very beautiful. The vilakku pujai set is beautiful. I guess you could not cover all your themes in the photo. Upload them in the craft section so we can the full theme

lovely arrangement especially I loved the Radha krishna on top and vilakku poojai set up is simply superb.

The doll dressed in saree on the front looks so pretty! Ganesha musical set is also interesting. A beautifully displayed golu.

You've mentioned about your mixed art work, Mural painting, pencil shading and Glass painting works. When time permits, please do upload them all one at a time in our crafts section. Our members enjoy admiring others craft works and comment as well.

Thank you for participating in our Navratri contest.
Wish you a happy and a prosperous Diwali.