A dotted kolam for the contest. Dot count: 15-8 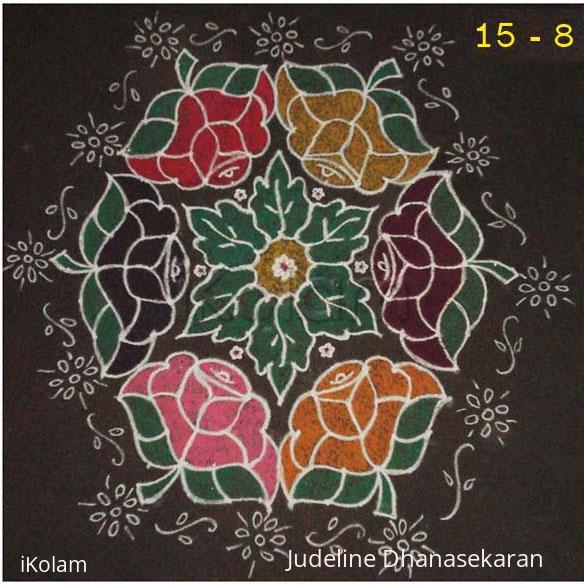 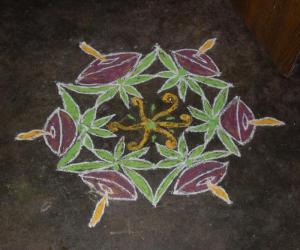 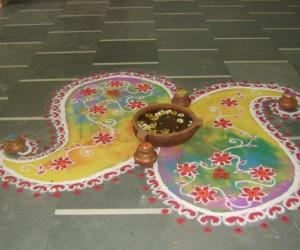 Judy, I've my eyes on the black rose! For a change it is nice to see the flowers in different colors. Your casually added tear shaped flowers and swirls frame this dotted kolam very well, and the whole arrangement with leaves makes it so beautiful! I'm glad you could participate in your busy schedule.

Wish you all the best!

Judy, You made a hatrick of roses kolam, I think you proved that you like the roses most. very supppperb design. All the best.

wow!!beautiful roses!!nice strokes.. keep it up, Wish you all the best!

roses are red maroon and yellow so u design are bright and yellow!
good work
Vyjayanthi
HAVE A NICE DAY !

Vanna roja kootam. Pretty roses. For Sure you like Roses.

Very nice! The background and the colors of the roses go well with each other!

very nice. looks as if drawn with exact measurements.

First look - charming,
Creativity - traditional,
Details - good colouring and clear strokes,
Symmetry - the colours for the flower arrangement could have been different, at the moment the symmetry is minimal,
Overall - very good.

Thanks one and all for your encouraging comments and for whatever rating you have given my kolam. This was not made for the contest as I did not have the time due to some family functions recently (I really regret that I could not devote time to make one specially for the contest which I was so looking forward to). This was done for New Year and I used some colours that were left over from last year (I am still on the look out for colours like Brindha - can you hear me dear??) I definitely agree with you JKM on the colouring for the flowers they are not good enouogh. Promise to come with a much better kolam for the next competition. Lata when is the next one?? (I can hear you saying - we are not finished with this one yet and she is asking for the next - hehe)

Judy, what to say! You are an expert in both the real kolam as well as computer kolam. Though it is made in a hurry, it is beautiful especially the border designs look so cute. My MIL also liked this very much.

Judy Are the pretty roses sitting in a roundtable conference?You could have drawn a beautiful face in the centre design.
Atleast you could send this beautiful work. But I could not send anything since my space problem did not allow me to upload anything till recently.No problem, I enjoyed seeing and commmenting so many wonderful kolams from so Many NEWCOMERS.
rajamma

We fixed the space problem many days before the due date. Lakshmi and Akila were also affected by this problem, and we did a site-wide space allotment to make sure no one is affected (since we had a contest approaching). But I think I know what might have happened. Even after fixing the space problem, Akila had trouble uploading for a few days. We finally figured out that she was able to upload the rest of the regular rangolis, and had problem only with the contest ones, only because the size of her rangoli. She kept trying to upload her contest entry which was 4mb big. I had asked her to email me her file just 3 hrs before the announced deadline. My guess is that you might have tried with a bigger image in the meantime. One thing I can say for sure is; space was allocated globally, so no one had the problem since. There are a couple of people approaching the limit once again soon, but that's because they have been busy uploading many files in the queue. I thought you couldn't participate because of your family engagements.

very nice kolam all the best

Thank you Ishwarya, Brindha (and aunty - so sweet of you), Rajamma, Lakshmi 2000 and Prabha for sparing time to vote for me and for the lovely comments too

Thank you one and all who had spent their time commenting and voting for my kolam. Happy to be in the 10th place atleast - thank you once again

Judy congrats to be on the 10th spot.

Thanks Sudha. You know last year I got 26 votes and this time I got 50 - so I got double promotion this year I think and that itself is a prize in itself - I am really very happy

Let us expect a century next time . well done keep it up