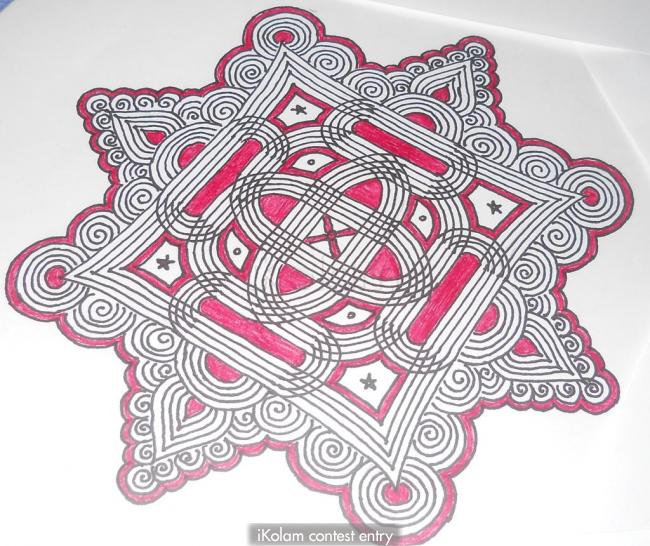 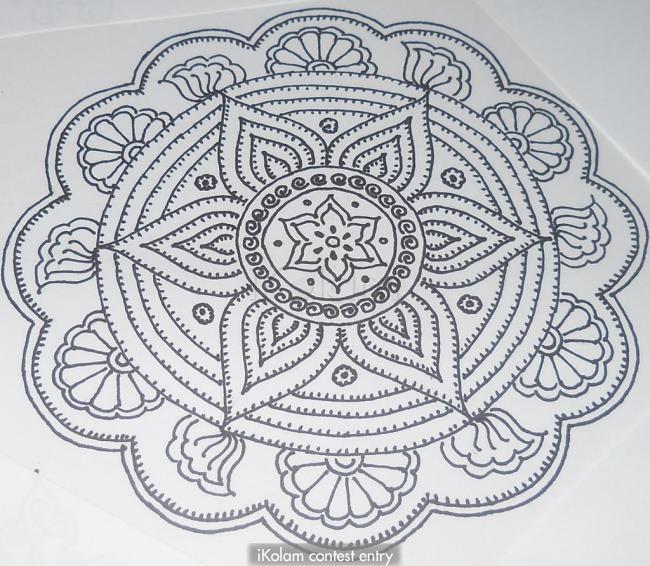 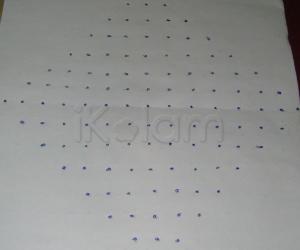 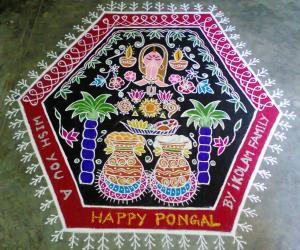 Friends, I drew the HAPPY PONGAL rangoli for Vasal/Suriyan Pongal with 21 - 11 interlaced dots. I enclose the pencil sketch with the dot grid as first image. The second image is the colored version of my rangoli. The center portion of the rangoli is a dotted one. The outer portion (Border) is both freehand and dotted for the decoration of the rangoli.

Beautifully drawn rangolis! Lovely shade of red with the gray used in the first one.
We would like to know if both of these entries are dotted ones by any chance. They look like freehand rangolis. We would not want to assume. Kindly let us know.

Thanks for the comments. These are free hand Rangoli kolams we used to draw during
Marghazhi fesival in front of our homes and a lot of similar colour Rangolis are also
available but could not be forwarded for the contest as only two kolams are permitted
for the contest.

Since I wanted to enrol for the previous contests also but could not due to some
uploading problem in our computer in time. This also was sent with great difficulty
only on 16th January with the help of my daughter in law for the contest.

Anyway thanks for posting my kolams in the website and also for the comments made by
other contestents.

Both designs are good! I feel it is drawn on paper. Very attractive but do not come under pongal concept!

Both the kolams look very pretty.

I love both the beautiful freehand drawings, but seem to be unconnected with the festival theme. The dot patterns too are missing. Really lovely work, though. Best of luck! Regards! - mOhana

These kolams are not dotted ones and only Rangoli Free hand kolams and we used to draw
in front of our homes during festivals viz" Margazhi. Pongal, Tamil New Year, Deepavali etc.
and I have a great good album of all kolams like these with me. Some of my Rangoli kolams
have been published in the magazines Aval Vikatan, Mangayar Malar, Manjula Ramesh Snehithi
etc., in many of their issues and recently in the last three months also.
Any way thanks for the comments :love:

beautiful designs, thanks for sharing

very nice padikolam and a free hand design i liked the second one, which also resembles like a mehendhi design.