Pookalam done by me on the occasion of my niece wedding recently. Lovely fresh flowers and fern were used to decorate & heart was filled with Kozhi poo which had a velvet touch. Wax candles were lit n placed on the tip of Kuttu vilakku. 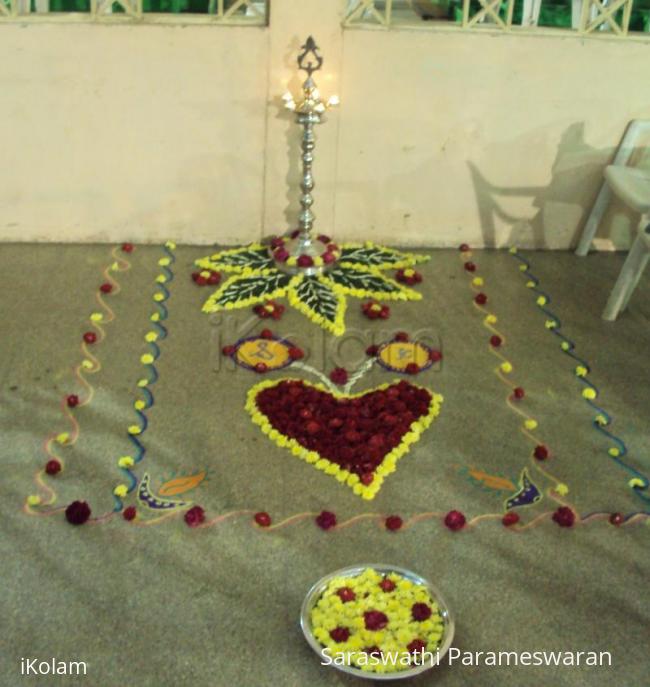 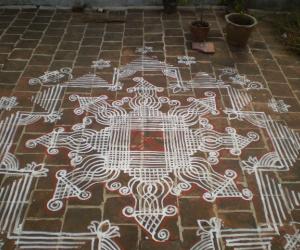 Sarasji. Floral arrangement is so divine.

Neat arrangement, the leaves part has come out extraordinary

Nice display of flowers and rangoli! Hope you enjoyed doing it and got other's appreciations too!

Nice decoration around the kuthuvillaku especially the veins on the leaves,I liked the way u used tea candles on the kuthuvilaku

leaves and flowers and rangoli pwdrs have performed a wonderful show here, i just love those tiny diyas drawn

Wonderful arrangement of flowers. The Leaves, the heart shaped design are the centre of attraction. the borders are also very cute.

lovely arrangement saras.really, this morning I was thinking about you.

Lovely arrangement made with HEART full of LOVE, Saras:) The curves in the border with single flower in each tiny circle, look very cute.

Fantastic. wedding gift for the two HEARTS joing on that day to become one. The red color kozhi poo is very well used. the greeny leaves and the white lines in that all come out very weel. Hope those came for the wedding enjoyed this.
rajamma

Very beautifully and thoughtfully arranged flower pattern. Superb work. What are the other names for this cock/hen flowers

Celosia (pronounced /siːˈloʊʃiə/) is a small genus of edible and ornamental plants, similar in appearance and uses to the amaranths. Deriving from the Greek word ‘kelos,’ meaning burned. They are sometimes called cockscombs or woolflowers. The name itself refers to the plant’s brilliant appearance and striking flame-like flower heads which resemble cockscombs. The name "cockscomb" may be restricted to those whose flower heads are crested by fasciation. The plant is well known in East Africa’s highlands and is used under its Swahili name, mfungu (source - Wikipedia)..