This year DeepaavaLi rangoli done free hand, of course sikku lamp & border with dots :). Initially had put only Ganesha on first day, later added Goddess Lakshmi on second.
Lord Ganesha inspired by Mandana style of drawing.
Goddess Lakshmi inspired by Mysore painting, was not able to get all the intricate work done there, hope to make a painting in near future. 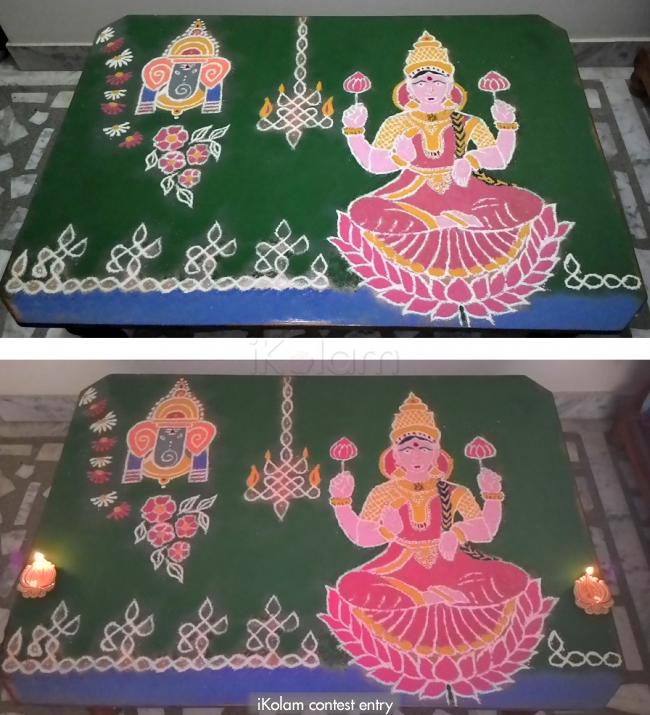 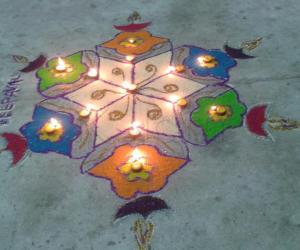 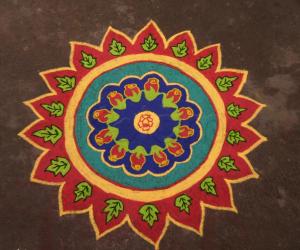 thanks soo much sugu ma'm.... tried to put the golden plait on the jadai, I could only get to that much, I am glad you liked it.

A very beautiful Rangoli of God Ganesha and Goddess Laxmi.

Very Beautiful. All the best.

Awesome Anirudh, Lakshmi ,Ganesha and other aspects cute. All the best

sowmya ma'm....thanks soo much.... very happy hear from you

Awesome ganesha and Lakshmi rangoli.. All the best

Mam, very auspicious and beautiful rangoli. All the best

thanks soo much Akila ma'm

thanks Chethan, nice to hear you after long time

Anirudh, what a fantastic rangoli, you have made real Lakshmi pooja for Diwali, The Goddess looking beautiful in a red saree, pretty jadai alankaaram sitting on a lovely lotus. The stylish Ganesha, chikku border and lamps cute flowers all add the charm. What is the base used to draw this?ALL THE BEST.

thanks soo much rajammaji, I was waiting for your comment :)....very happy now
The base is a table

.We had a old two step table, and that was cut & made into two separate tables which is of lesser height. I am now using it to draw rangolis during festivals, so that I can keep it for long time

thanks a lot roja ma'm

thanks a lot Lakshmi ma'm

A Divine Lakshmi-Ganesha rendering for the contest! Everything on Lakshmi looks great; from the crown to the flower seating! Very nice Mandana style of Ganeshji, and a nice lamp between the two deities. Beautiful work!

Thank you so much for participating in the Rangoli contest. And we look forward to seeing more of your wonderful artworks in the future.

thanks a lot Lata ....sure will make time to create more

Anirudh wooow I am speechless with this divine beauty... So well drawn with nice detailing... We are so proud of you ... all the best

thanks soo much Pushpa