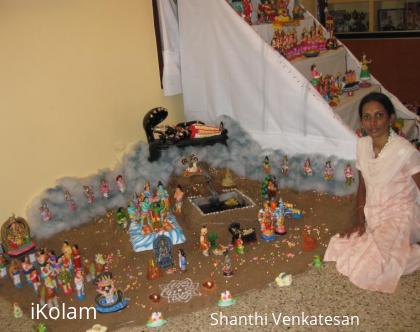 Here are the kolams and rangolis in this page:
Garbhodhaka Shayi Vishnu 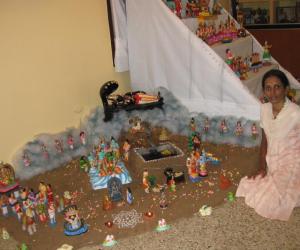 Sriman Narayana out of compassion and to save HIS bhakthas from asuras or demons have incarnated in this material world time and again.HIS avathara leelas are plenty and beyond our count.However ten avatharas of Vishnu are considered as most important ones and you are now watching them on the left pane in flash.

The prime ten incarnations of SrI Maha vishnu are:

Only under certain conditions do the planets float as weightless balls in the air, and as soon as these conditions are disturbed, the planets may fall down in the Garbhodaka Ocean, which covers half the universe. The other half is the spherical dome within which the innumerable planetary systems exist.

Śrīla Viśvanātha Cakravartī Ṭhākura explains that the different hellish planets within this universe are held slightly above the Garbhodaka Ocean and remain situated there.

Lord Shesha is often seen floating on the causal waters of the Garbhodaka Ocean, which exists on the bottom of the universe. Lord Vishnu is thus resting on Sheshanaga as They float on the ocean. At other times, They are viewed floating on the Kshiramudra, or an ocean of white milk. This represents the Prakriti or the ingredients of the unmanifest material nature in its purest form.

Our Golu this time depicts Maha-Vishnu reclined on sesha on Garbhodaka sea and also symbolizes that Sacred river Ganga in nothing but a drop of water in the Garbhodhaka Ocean.