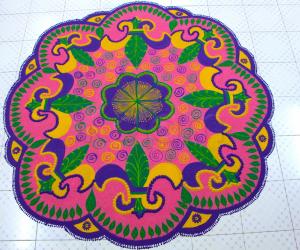 Hi Friends ,this is a free hand design drawn for Mardi Gras - 2014,your views please. 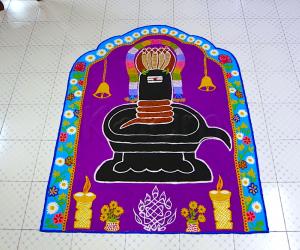 Hi friends this is a free hand design drawn by my friend vijaya and my self for Maha Shivarathri.

1. Andhakasura hara – as he killed Andhakasura named daitya
2. Ashutosha – As he gives the boon very early
3. Chandrashekara/somashekara – as he has Chandra on his head
4. Damarugapani – As he has Damaruga in one of his hands swhile dancing
5. Doorjati – As he has JaTaa
6. Gajacharmambaradhara – As he has killed a daithya named Gajasura by entering the body of an elephant and he was covered with the body of the elephant when he did the Tandava Nrutya, he is called as Gajacharmambaradhara.
6a. Gajasuramardhana – Daithya Neela came in the disguise of an elephant as Gajasura गजासुर who entered the body of an elephant and attacked Shiva. Shiva also entered the body of the elephant and did the Taandava nrutya there itself and killed the demon Gajasura from within the elephant. Thus he is called as Gajasuramardhana.
7. Nandi Vahana – As he has Nandi as his vehicle
8. Gangadhara – As he always has Ganga on his head. Some poets, novelists have called Ganga as the wife of Shiva. But it is wrong. Ganga was never the wife of Shiva. Ganga is the wife of Varuna. Shiva was holding her as she requested him to give some place in him and Ganga had vishesha sannidhana of Srihari, as she is Vishnu paadodaka.
9. Kaamaari – As he burnt alive Kaama/Manmatha - When Gods sent Manmatha to break the penance of Shiva, he throwed his kaama arrow on Shiva, which made Shiva angry and he opened his third eye and Manmatha was burnt to ashes.
10. Kailasavaasa – As he is kailasavaasi
11. Kruthivaasa – as he wears charma or animal skin as his dress – he is also called as Charmambaradara
12. Manoniyamaka – As he controls the chitta of all
13. Maheshwara – As he is superior to Indradi sakala devategalu
14. Mrutyunjaya – As he has more power than the so called Mrutyu devate Yama – Sage Markandeya had a very short lift of only 16 years. Markandeya was known that his life is very short. So, he worshipped Shiva with utmost devotion. After the completion of 16th year, Yamadharmaraja came to take Markandeya by pulling him with arrows, Shiva came and rescued Markandeya and blessed him with Chiranjeevatva. That is why Markandeya is considered as one of the Chiranjeevi.
15. Nataraja – As he is an expert in Dancing – Naatya
16. Nagabharana – As he has Naga(snake) as one of his ornaments
17. Nagabhushana – As he has Snake to his neck
18. Neelakanta – As his throat colour turned blue after drinking hala hala visha.
19. Paarvateesha – As he is the Isha of Parvathi
20. Pinaaki – As he has pinaka as his weapon
21. Rudra – “Rodanaath Rudra:” - As soon as he was born he was crying continuously. That is why he is called as Rudra.
22. Sadyojaata – As he was born all of a sudden from Chaturmukha
23. Sarangapani – As he has in his hands Saranga (deer)
24. Shambhu – As he is the source of Sukha, he is termed as Shambhu
25. Shankara – As he gives “Sukha”
26. Sharva – As he is laya kartha with the blessings of Srihari.
27. Shiva – As he is mangalakara – he is termed as “Shiva”
28. Vamadeva - “vaama” means handsome/beautiful/sundara. Leaving Hari Vayu Brahma, Garuda shesha, he is ati-sundara very handsome. That is why he is called as Vamadeva.
29. Vamadeva – He is called as Vamadeva as he has Srihari to his left always
30. Virinchiputra – As he is the son of Brahma (Virinchi)
31. Vrushadhwaja – as he has Vrushabha Dwaja
32. Vishakanta – As he drunk the left over of halahala visha after majority of it was drunken by Vayudevaru.
33. Trishulapaani – As he has Trishula in one of his arms
34. Tripuraari – As he killed tripurasuras with the blessings of Srihari
35. Trinetra/trilochana/mukkanna – As he has three eyes
36. Ugra – As he is shatru bhayankara
37. Ugratapas – As he has done tapas for Kalpadi paryanta 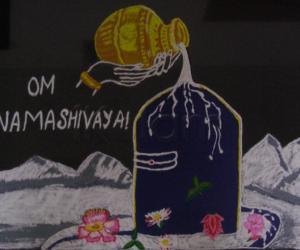 hi friends...May the blessings of Lord Shiva be with you all...Sending you my warm wishes on Maha Shivratri! 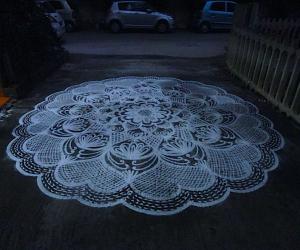 Hi friends this free hand kolam was drawn in front of my house ur views please.. 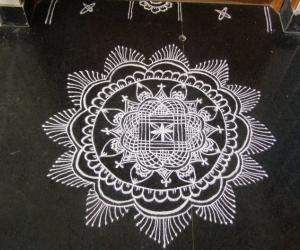 hi friends...this is a free hand kolam for friday. hope you all like this 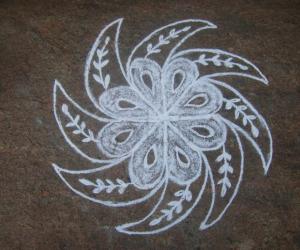 did this one today 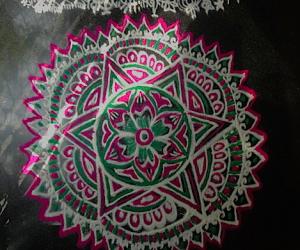 hi friends this free hand kolam was drawn in front of thulasi brimdhavana.... 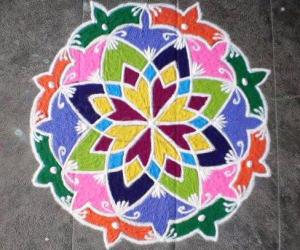 Hello friends..extremely happy to celebrate my 4th ikolam anniversary with this small kolam amidst of my busy schedule .....heartfelt thanks to ikolam,lata and U wonderful Friends for all the love and support you have been giving me all these years....Thanks again :love: :love: 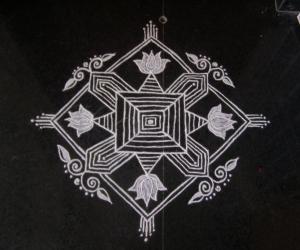 hi friends....this is a free hand kolam for Sunday 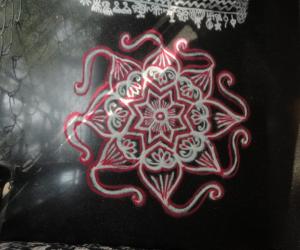