Here are the kolams and rangolis in this page:
KOLU - Part-1-Steps, Rajasthani Drama & Aachi Maaligai 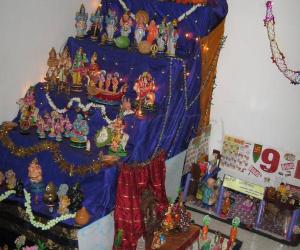 Our kolu has five steps adorning various deities as depicted in the picture. The first step has been dedicated exclusively to Lord Perumal & Lordess Alamelumanga. The second step is adorned by the traditional Dasavatharams of Lord Vishnu. The third step is dedicated to the two mythological stories associated with Navaratri (Ravan vadh by Lord Rama and mahishasura vadh by Lordess Durga). Hence, it consists of Lord Rama, Lakshmana, Hanuman & Lordess Sita and also the same shown being rowed by Guhan. On the same step, Goddess Durga has been placed. The fourth step consists of the various forms of Krishna like playing the flute, eating butter, the baby krishna and with gopikas.The fifth & the last step contains a collection of Ganesha in various forms.

One of the main elements of our Kolu is the ‘Rajasthani Drama’ with its cheering audience which illustrates, kolu extends beyond South India even to the west India, Rajasthan. This is not a set as available in the market. Various old clothes and papers have been creatively used to bring in the effect.

The modern departmental store ‘Aachi Maligai’ with a variety of products ranging from daily products to food grains and adjoining refreshments counter manifests the fact that now every city, town or village in India has a departmental store and brought our the solution to our day-to-day needs to our door step. 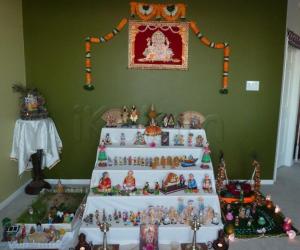 Attached is the full golu view.Ill send the close-up of thottil krishna and Damodara lila in another submission.