Here are the kolams and rangolis in this page:
Golu Contest 2010 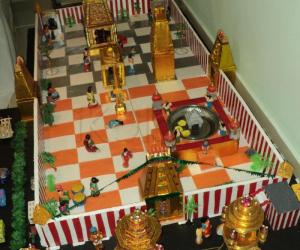 Hi Friends.. here am uploading our Golu photo... we have set up Lord Shiva temple which is made up of Thermacoal... please vote for me..
Thank You. 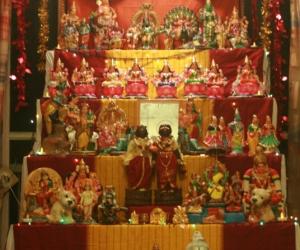 Bommai Golu in October 2010 at my home in Chembur Mumbai 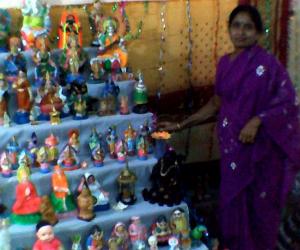 Here is a picture of our Navrathri golu, for this year. I'm not able to show some of my creations due to lack of time. 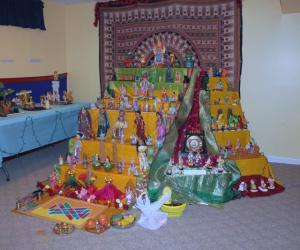 My Golu consists of a main golu and a theme Golu. My main Golu is made of 7+5+1 padis; 7 steps in the front, 5 to the side and 1 that connects both. Theme Golu is based on mythological stories and Indian traditions and I change this every year. This year I chose Ramayan. This picture here is the main Golu. 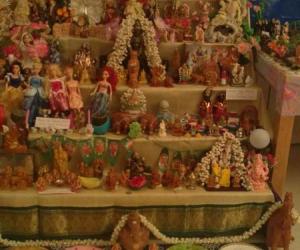 Golu steps contains
---------------
1. Dasavatharam
2. Astalakshmi
3. Karthigai pengal
4. Krishna collections
5. Marapachi doll with chettiyar dolls
6. Ross of Tralee competition of Ireland - This year the winner is "Claire Kambamettu" - an Indian origin is selected as Ross of Tralee for the first time.
7. Muruga with Valli and Devaanai
and much more

SundaraKandam - theme for the park. 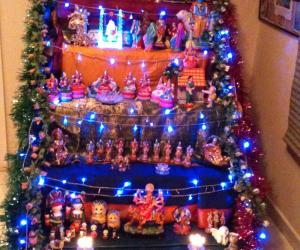 Uploading the photo -1 of the golu i kept at my home in dubai. 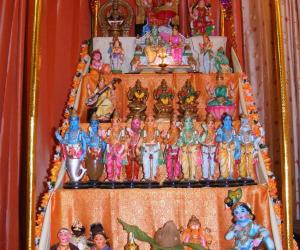 i am submitting 2 photographs of the golu arranged in my place. Note that the dasavatharam and ram darbar dolls are 50 years old and have been passed on to me by my mom. 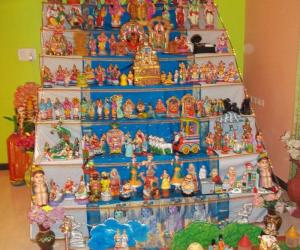 We have depicted 3 Themes in our GOLU :
THEME 1:

STORY FROM GANESHA PURANAM-HOW MUSHIKA BECAME THE VAHANAM OF LORD GANESHA.
Mushika Vahana Slokam is the one of the most common Slokams that everyone ones & we have explained the Slokam with a Story & the Moral.
One Slokam-Story-Meaning & Moral.
THEME 2:

We also have a Kolam of Godess Saraswathi & Doll of Godess Lakshmi( made at home-stitched by me & my mother,we bought the face from shop). 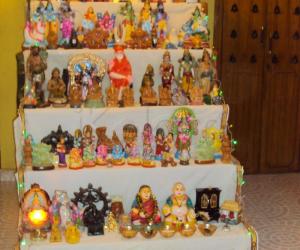 Hope u all enjoy may golu. Exp your valuable comments 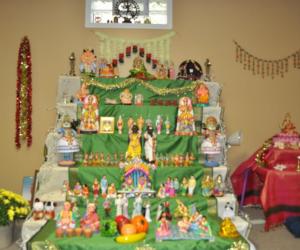 We had a great Navarathri celebration this year. Hightlight of this year's pooja was the Lalitha Sahasranama Pooja done by Shringeri mutt.
We do a different theme in our golu every year. We had built a small Indian village this year. Kids had a wonderful time making all the huts and houses. We had hatched roof and brick houses built.sowed seeds around for fields in the village. We made a small well, bullock cart, temple etc.I was so happy that I was practically able to show and tell the kids on how simple life in a village would be.
I am happy that Navarathri is well done by all Indians here and it is exposing our kids to the rich Indian culture.