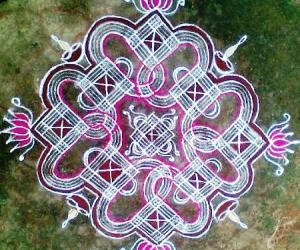 Hello Friends,I made this kolam today in front of my house.Hope you like it. 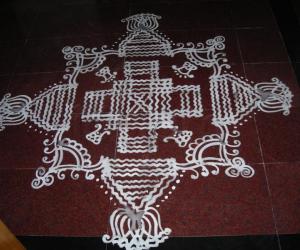 Hi all,
This kolam was made by me on Navarathri day-2. I got this design from one of the websites (not i-kolam). All the three wet maavu kolam that i have uploaded in the past few days are all done using dosa maavu.
As usual, don't forget to send ur feedback and suggestions. 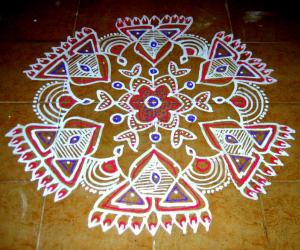 Being Mahalaya Amaavaasya day, dayfull I was busy.Now in the evening came to the terrece and put this kolam with wet maave and color podi to welcome Navraathri!. It is a dotted kolam dot count 9-5 in between dots and 2 dots on all the six corners. 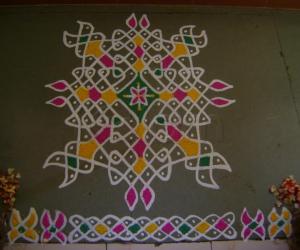 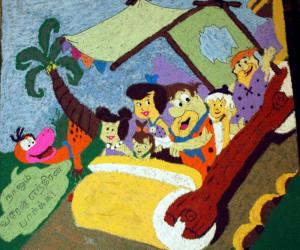 In our house, we have a traditional golu every year. My husband does the whole job of cleaning the house(!), setting the steps, keeping the dolls in order, doing the pooja etc., My job is to put kolams/rangoli. This year, as suggested by Latha, I had bought some color sand from 'Micheals' during my US trip. Also, collected some sand from California beaches (this packet was checked by the airlines officials at each point) but reached the destination somehow!

For the past one month,I was thinking about the theme of the rangoli for this year. One theme running in my mind was ' sutta pazham venuma.......of Avvaiyar-Murugan'but I thought it won't be colorful. Two weeks back, one fine morning I saw a picture of Flintstone specially designed by google to mark the 50th year of that cartoon! Immediately my plan also switched over to that. Added to that, 'Endiran' fever also caught the town/world! So combined both in the last minute and the final output is presented here for your vote!
I tried the faces first. Only after satisfying myself I proceeded further. I rate my rangoli @ 70%! What about you? 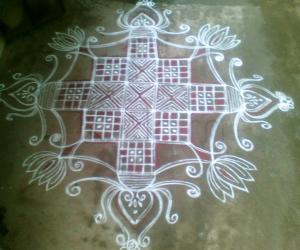 Hai Friends!!!! I made this special padikolam for Welcoming Navrathri. Your views please... 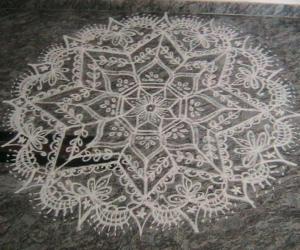 Hi frienz, I drew this today morning, please let me know all your views. HAPPY NAVRATHRI TO ALL OF YOU. 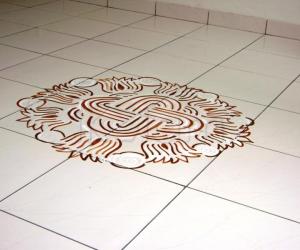 It has been a long time since I logged into Kolam and it feels very nice to browse through all your rangolis comments etc !

A VERY HAPPY & PROSPEROUS DUSSEHRA TO ALL OF YOU 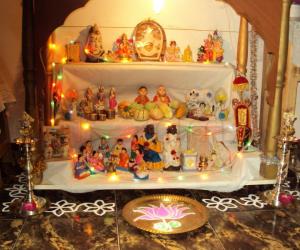 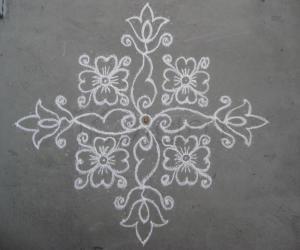 This kolam was made this evening to welcome Lalitha Thripurasundari Ambaal for Navarathri. Dot count from the middle - 13,11,7,7,3,3,1. The leaf-kind-of motif was lifted from a mehendi design -